The importance of changing behaviors to avoid water scarcity

The planet’s thirst has become increasingly difficult to satisfy as political and economic action seem inefficient in the fight against water scarcity. Around 1.1 billion people worldwide do not have access to water and it is estimated that many more will be drinking the desert in a not so distant nor sunny future if agents like population growth, economic development, deforestation and pollution keep on changing water patterns. How can we achieve more efficient use of this renewable resource? May the following article be the voice of Poseidon.

Water covers 70% of our planet, mostly on seas and oceans, and it is easy to forget that drinkable freshwater is limited. Owning to the processes of the water cycle, water is a renewable resource. Water evaporates itself from the Earth’s surface to the atmosphere where it condenses, then it falls back into the Earth in the form of rain or snow and is accumulated in rivers, lakes, aquifers, etc. Only 3% of the world’s water is freshwater, and two-thirds of that is trapped in frozen glaciers. In the end, there is only 1% of freshwater available to be drunk, used for baths, for industries, and agriculture. As a result of political and geographical inefficiency, around 1.1 billion people worldwide do not have access to water, and around 2.7 billion suffer from water scarcity for at least one month per year. 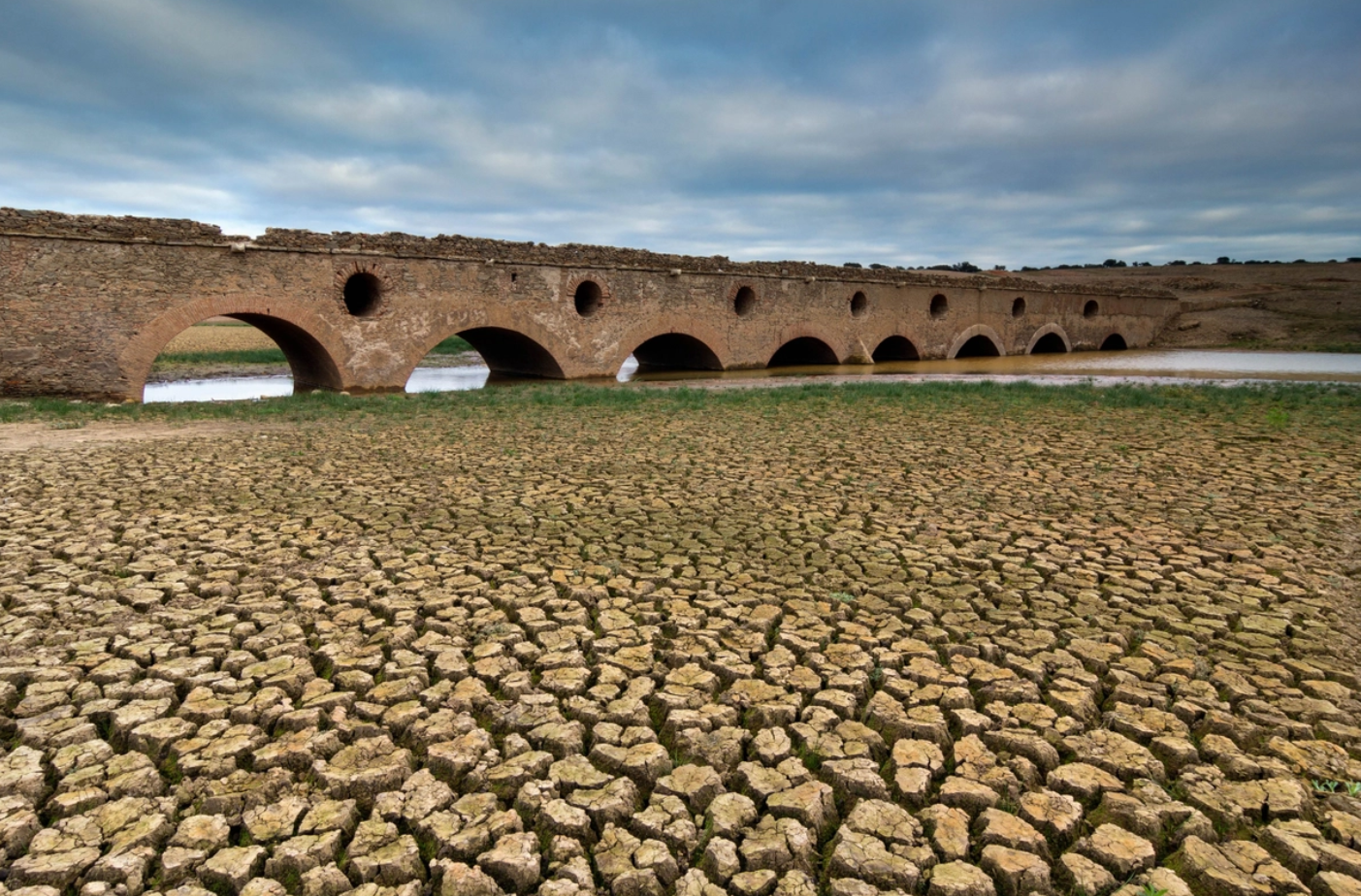 Caption for picture: Alcacér do Sal

Population growth, economic development, urbanization, deforestation, pollution, and global warming are causing changes in weather and water patterns, leading to shortages and droughts in some areas and floods in others. The 2017 Global Risks Report of the World Economic Forum ranked the water crisis as the third most urgent risk in terms of impact on humanity. Water scarcity affects both wealthy and poor countries, the only difference between them lies in how their governments and institutions deal with the issue, which deepens world inequalities. 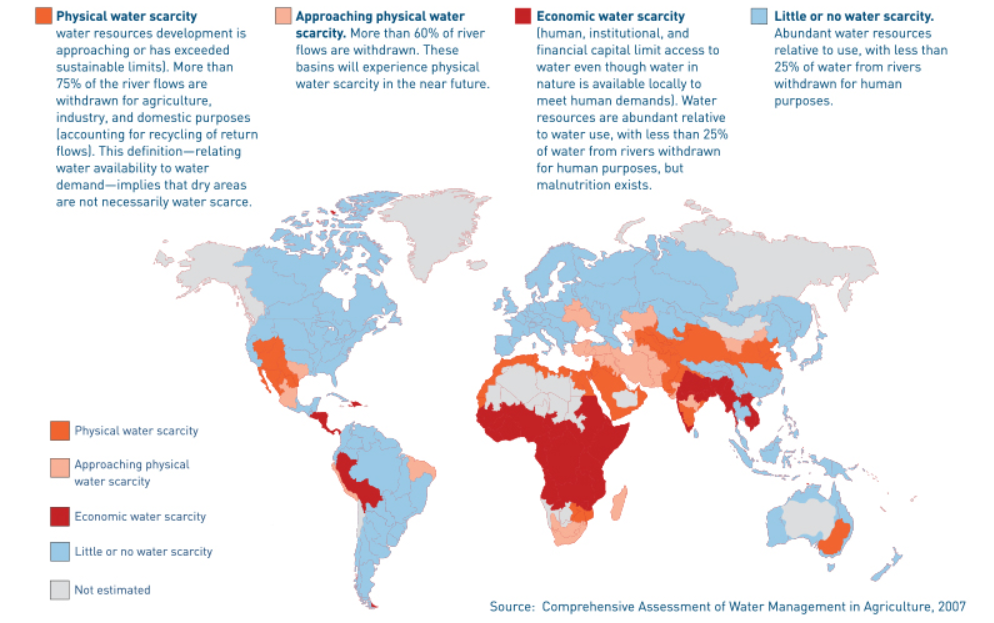 For example, water productivity in the Middle East and North Africa is half the world’s average, according to the World Bank, and around 82% of their wastewater is currently not recyclable. Paradoxically, these regions have the lowest water tariffs around the world, and the highest proportion of GDP spent on public water subsidies. In addition, according to the World Bank, by 2050, the GDP of these regions may decrease to a level between 6% to 14% because of climate-related water scarcity.

In places that suffer from physical water scarcity, or have limited access to surface water, dependence on aquifers is very common. However, the exploitation, especially without proper planning, of groundwater resources can endanger future water supplies, if the rate of withdrawal from the aquifer is higher than the rate of natural recharge. One good example of the effect of exploitation of groundwater resources is the Aral Sea: once the world’s fourth-largest lake on inland water, it has now shrunk to a fraction of its former size.

Caption for picture: Aral Sea evolution through the years On average, annual precipitation in Portugal is about 900mm, which is a healthy number, but its distribution is not regular: approximately half of the precipitation occurs during the winter and in the North region, which is cooler and damper. Setúbal, Évora, Faro, and Portalegre are South districts where water scarcity is most serious. With the increase in temperatures, (between 1976 and 2006 temperatures rose 0,5ºC, per decade), and changes in weather and water patterns, Portugal has been experiencing droughts more frequently. 2004 and 2005 were extremely dry years, which caused the most severe drought in 60 years. More recently, in 2019, 40% of the Portuguese territory faced a severe drought. These droughts often bring the necessity to create a long-run strategy to increase the supply of water and reduce its consumption.

According to a study sponsored by the Calouste Gulbenkian Foundation, 75% of water is used for Portuguese agriculture, yet a great portion of that water is wasted, due to poor management or leaks in irrigation systems, for example. Using more productive equipment and agricultural technologies will certainly help fight water scarcity in Portugal, but it will also bring economic benefits to farmers. Farmers who have made the transition to these new technologies state that they have reduced water use by between 20% and 50%. Nonetheless, this transition is expensive, as such, farmers should not be the only ones responsible for sustaining it. Large-scale distribution and the agri-food industry should also be accountable to invest in more efficient technologies.

As reported by DECO, in Portugal, the potential for water efficiency is estimated at between 30% to 50%, this means that part of the water is lost in the water supply system, and it is not efficiently used and saved by households and firms. Despite most of the water use being directed at agriculture practices, individuals must be more conscious of the waste they create. According to the United Nations, each person only requires 110L of freshwater a day to satisfy their needs. In Portugal, the average daily consumption is around 187L. This year’s rain was a breath of fresh air, especially to farmers. Some dams were filled until almost maximum capacity, as is the case of the Alqueva dam. The stored water in the Alqueva dam guarantees the supply of freshwater for the next 3 years for agriculture and energy production. Simple actions, such as reducing meat consumption, avoiding buying new clothes, taking 5-minute showers, or saving the cold water into a bucket while waiting for hot water to come when taking a bath, and then using it to flush the toilet, for example, can have a major impact in saving water. If Portugal doesn’t change, by 2040 it will be among the countries with severe water stress. 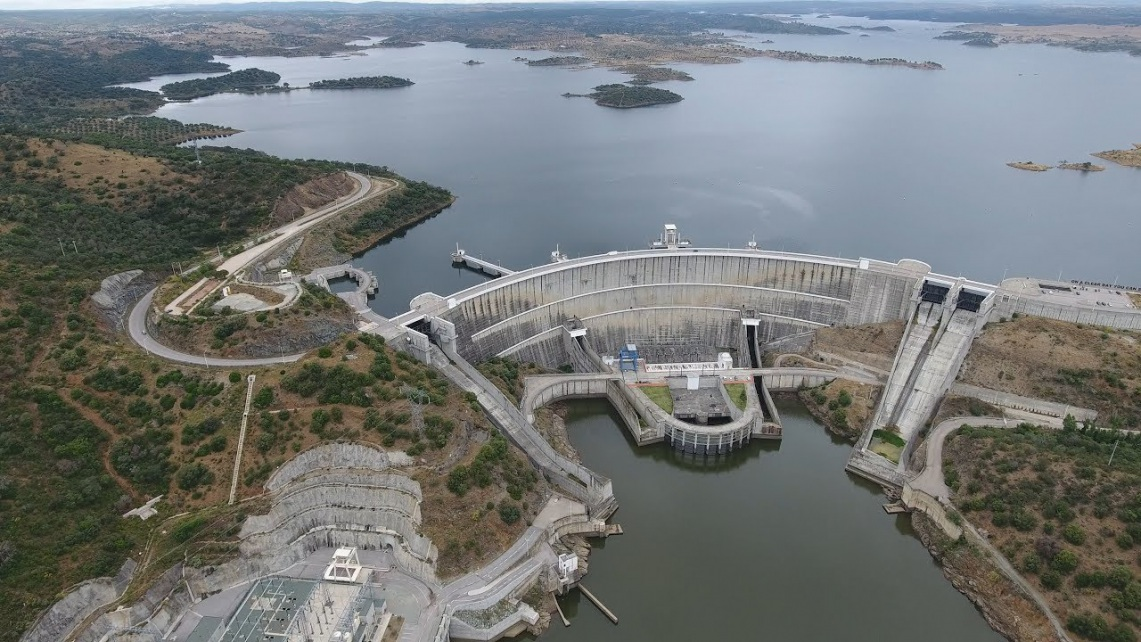 Public education, implementation of sustainable resource management initiatives, improvement in agriculture technology, are among the solutions to fight water scarcity. Governments must change their policies towards water waste, and reinforce their regulations towards water use to prevent water scarcity. Aid between countries, to prevent border conflicts and world inequality, must be in the country’s most important priorities.